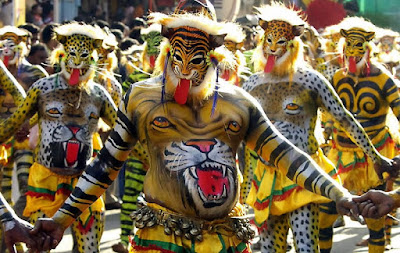 On friday I was in Coimbatore. After finishing my work in evening, I asked my friend Jyotikrishnan (my sixth grade class mate) "now what to do? should we return to Chennai or any new thing is there that you want me to see.
He told me that there is a place called Thrissur where Onam festival is going on and it's only 114 Km from Coimbatore. He told me that we can see famous Tiger Dance on Saturday. We drove to Thrissur by his car and reached there in two & half hour through National Highway no. NH 47. It was 11:00 PM when we reached there. We took hotel and relaxed there for our next day adventure.
Jyoti told me that this Tiger Dance called as 'Pulikai' in their local language. It is celebrated every year in month of August or September. Hundreds of males with huge bellies and children wearing tiger masks take part in the Tiger dance, that forms a key element of the popular harvest festival of Onam in Kerala.

The main theme of the dance is tiger hunting. In Thrissur more than 800 people dressed as tigers from the neighbouring 14 village areas in the district, participate in the event held on the fourth day of Onam at Swaraj Ground of Thrissur.
In the early days, masks were not used at all and participants would have themselves painted all over, on their faces as well. But now, ready made masks, cosmetic teeth, tongues, beards and mustaches are used by the participants along with the paint on their bodies. The tigers also wear a broad belt with jingles around their waist. By afternoon the Pulikkali groups or 'sangams' as they are called, from all four corners of Thrissur move in a procession, dancing, and shaking their bellies to the beat of the drums through the streets to the Swaraj Ground situated in the heart of the city. Scenes such as the tiger preying on an animal, and a tiger being hunted by a hunters are enacted beautifully in between. Thousands of spectators line the streets enjoying the dance, cheering the dancers some of them even trying to join in.

We left Thrissur by late evening for Cochin International Airport which is only 50 Kms from Thrissur. I thanks Jyotikrishnan for showing me amazing dance of Tigers.

Once again Thanks Jyoti !