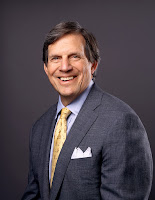 Peter Grauer, the Chairman and CEO of Bloomberg, is a man with a mantra and he repeats it every chance he gets: “We have an aspiration at Bloomberg to become the most influential news organisation in the world.”
A glance at the statistics behind the media empire started in 1981 by the eponymous Michael Bloomberg (who, on becoming the 108th Mayor of the City of New York on January 1, 2002, left the running of his company to long-time friend and associate Grauer), shows that the global media company is nearly at the goal line: 287,000 subscribers in 140 countries, accessing between 5,000 & 7,000 news stories a day, as well as data and analytics created by 11,519 employees globally (as of April, 2010).
Grauer estimates the company’s proprietary terminal business alone generated revenue in excess of $5.5 billion last year, with a compound growth rate greater than 12 per cent per annum.