﻿What a week-end, Rakhi on Saturday, than Sunday and than Independence Day on Monday, three days continuous holiday. Amrita is here in Gurgaon for Rakhi. I just flipped few TV channels and came to halt on local Haryanvi channel depicting history behind Rakhi, it was quite interesting. I just want to recall one story that you may found quit interesting. Story of Roshanak & Porus. ﻿﻿ 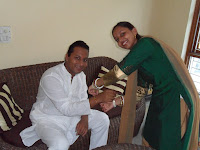 According to one legendary narrative, when Alexander the Great invaded in 326 BC, Roxana (or Roshanak, his wife) sent a sacred thread to Porus, asking him not to harm her husband in battle. In accordance with tradition, Porus, a Katoch king, gave full respect to the rakhi. On the battlefield, when Porus was about to deliver a final blow to Alexander, he saw the rakhi on his own wrist and restrained himself from attacking Alexander personally.