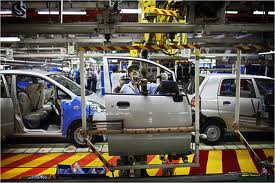 It took 12 years to build Taj Mahal and during these 12 years there were 23 incidences of labour strikes and similar unrest. Some time for inadequate supply of food and medicine and some time for lower wages. Most of the time Sahajahan resolved issues by penalizing workers with severe punishments. Strike has long history in India, when I saw today’s Economic times with news of violent clashes among workers of Maruti Suzuki I was deeply pained. Some 15 people were permanently sacked and 10 were suspended for few months.
All people involved in the strike are local people, living in nearby villages. I don’t know what exactly they want. As far as I know culture of Maruti Suzuki India Ltd., they have got excellent human resource team, their labor policy, pay packages and facilities are best in the industry. I don’t thing MSIL will do any thing that will be wrong on the part of Labour welfare.
Most of the workers are from surrounding villages, who are rarely educated and has become newly rich by selling off their ancestral agricultural land to industries. For sake of doing jobs they are working in the factories. Nowadays one can see SUVs standing in front of most of the houses in villages near Gurgaon & Manesar. These newly rich young villagers have no idea what could had be their life, if these auto giants like Maruti, Hero Honda, Suzuki Motor Cycles & Honda Scooters were not there. In early 1980’s there was nothing on this land, it was similar to any other place in India. Farming & cattle grazing was only the source of living. Had these auto giants not set-up their plants in this area, these people would still have working on farm and sleeping without electricity with their cattle.
One Major question, what government is doing? What local politicians are doing? This incidence of strike has worried investors. Maruti has already purchased the land in Gujarat. Industrialists are more comfortable in south especially in Chennai. Is all this going in right direction? More involvement of local politicians & leaders is needed.