My Visit to Madras Central Prison 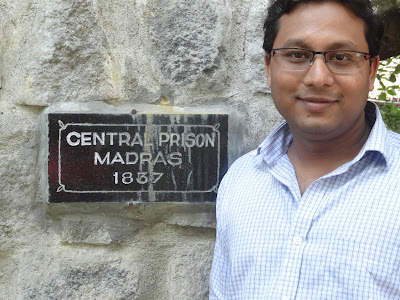 In 2007 I got chance to visit Central Prison Madras along with one of my Historian friend who was doing research on British filing system for India Prisoners.  The prison was 172 years old when it began to be demolished in June 2009.  Prisoners from the prison were moved to the newly constructed Puzhal Central Prison starting from 2006. Madras Central Prison was one of the oldest prisons in . It was located in Chennai (formerly ). It was initially called the Madras penitentiary until 1855 when it was renamed to Central Jail. It was originally built to house transit convicts who were to face the ‘sazaye kaala paani’ in Cellular Jail in Andaman and Nicobar Islands and constructed at the cost of Rs 16,496 on 11 acres (45,000 m2) of land. The prison housed Subhash Chandra Bose and Veer Savarkar during the days of independence movement.