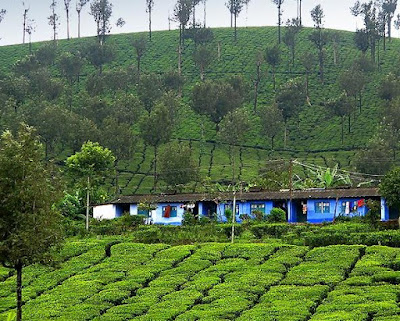 Tension prevailed in Valparai, a tea-growing town on the slopes of Western Ghats near Coimbatore in Tamil Nadu, after a 10-year-old male tiger sneaked into a cowshed in a thickly-populated locality early Friday morning.

However, the lone cow in the shed not only resisted the tiger's attack but also severely injured the big cat. Unable to walk, the tiger was confined to the cowshed till late evening, when a veterinarian tranquilized it.


Valparai is ringed by forests including the Anamalai Tiger Reserve and frequent attacks by leopards and elephants have been reported from here in the past. However, this is the first time in recent years that a tiger had entered a homestead.

The tiger was first seen by R Gnanasekaran, a resident of Periyar Nagar locality in Valaparai, who noticed the animal in his cowshed at around 6.30am. His cow was taking on the tiger that had entered the shed expecting an easy prey. The tiger had killed a calf owned by Gnanasekaran two days ago and left the half-eaten carcass behind. Forest officials said the animal may have returned to retrieve the kill. Angry at not finding the carcass, the tiger attacked the cow, which, however, fought back. The big cat sustained gashes in its thigh and abdomen whereas the cow suffered only minor injuries.

Gnanasekaran had thought the calf was killed by a leopard, common in the area, and buried the carcass. Forest officials have since confirmed that the tiger that appeared on Friday morning had killed the calf two days earlier.

Though the tiger couldn't move, its periodic growls and snarls left the crowd that had gathered at Gnansekaran's house guessing whether the animal would attack. Forest officials led by Manampally range officer Arokiaraj Xavier and Valparai range officer Krishnaswami had a tough time controlling the rush of people to watch the tiger. At noon, they tried to trap the tiger in a net and shift it to a cage. That, however, failed.

The wait lasted until forest veterinary assistant surgeon Dr N Kalaivanan arrived from Mudumalai Wildlife Sanctuary in the Nilgiris by 6.30pm. Though Valaparai is prone to frequent attacks by wild animals, veterinarians with expertise in the use of tranquilizers were not available in the town or in neighbouring areas. By sunset, Kalaivanan tranquilized the tiger and the animal was shifted to a cage after treating it for the injuries. Forest officials will keep the cat in captivity in Manampally forest range office under the observation of Kalaivanan until it recovers from the injuries.