127 Hours Between a Rock and a Hard Place 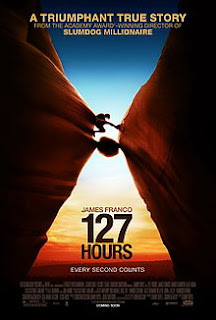 127 Hours is a 2010 biographical survival drama film directed, co-written and produced by Danny Boyle. The film stars James Franco as real-life canyoneer Aron Ralston, who became trapped by a boulder in an isolated slot canyon in Blue John Canyon, southeastern Utah, in April 2003, and was eventually forced to amputate his own right arm to free himself.
The film, based on Ralston's memoir Between a Rock and a Hard Place, was written by Boyle and Simon Beaufoy, produced by Christian Colson and John Smithson and the music was scored by A. R. Rahman. Beaufoy, Colson and Rahman had all previously worked with Boyle on Slumdog Millionaire. The film was received well by critics and audiences and it was nominated for six Academy Awards, including Best Picture and Best Actor for Franco. 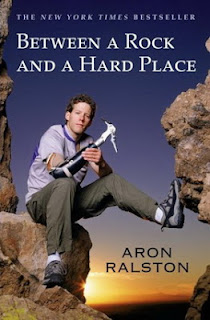 Between a Rock and a Hard Place is the autobiography of Aron Ralston. Published in 2004, the book predominantly recounts Ralston's experience being trapped in Blue John Canyon in the Utah desert and how he was forced to amputate his own right arm with a dull multi-tool in order to free himself after his arm became trapped by a boulder. Inc.com named Ralston's account one of seven "great entrepreneurship books that have nothing to do with business."
The book also describes Ralston's childhood, how he took up outdoor activities after moving to Colorado from Indiana, how he came to be an obsessive outdoorsman and how he left his engineering career at Intel in Arizona to take up outdoor activities as much as possible.
The book goes back and forth, in alternating chapters, between Ralston's past experiences and his entrapment in the slot canyon. Included in the hardcover edition are pictures of his days in the canyon, various photos from the past excursions he speaks of in the book, a glossary of mountaineering jargon, and maps of Blue John Canyon and the proximity of the canyon in central-eastern Utah.