Not Dead Yet by PETER JAMES 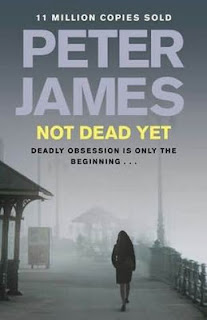 This is the second book from Peter James collection. First one was The perfect People, which compel me to become his fan. Not yet dead is plotted in and around Sussex (UK). This is a story of female rock star who is desperate to become successful Hollywood actress and has arrived in Brighton along with his son for shooting.  Before arriving at Brighton she was warned not to accept the role in film and one attempt on her life was made to demoralise her. Detective superintendent Roy Grace is in charge of her security who is also investigating a complicated murder case wherein police had found a dead body with no head, arms and limbs...
There is a stunning chemistry between characters – A obsessed fan of actress, assistant to detective, mysterious stalker who is threatening the actress, a crime reporter, an old drug dealer and beautiful pregnant girl friend of detective.
There are 127 chapter, each not more than 4 pages...and believe me each one is equally interesting and will compel you to go for next one.
Peter James has certainly continued to show his brilliance as a Crime Writer and as usual I look forward to his next book.