Last night I was reading a book by renowned economist Ha-Joon Chang – ‘BAD SAMARITANS’ the book is excellent worth purchasing. Chang argues that unregulated international trade (free markets) has very rarely succeeded in producing economic development. I would like to share one paragraph with you… 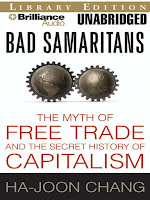 Once upon a time, the leading car maker of a developing country exported it’s first passenger cars to the US. Up to that day, the little company had only made shoddy products – poor copies of quality items made by richer countries. The car was nothing too sophisticated – just a cheap compact. But it was big moment for the country. Unfortunately the product failed.

The car had to be withdrawn from the US market. This disaster leads to a major debate among the country’s citizens. Many argued that company should have stuck to its original business of making simple textile machinery. After all the country’s biggest export item was silk. Other disagreed. They argued that no country had got anywhere without developing serious industry like automobile. They just needed more time to make car that appealed to everyone.

The year was 1947 and the country was JAPAN.

The company was TOYOTA and car was called the Toyopet.

Toyota started out as a manufacturing of textile machinery (Toyoda Automatic Loom) and moved into car production in 1947. Half a century after the launch of Toyopet , Toyota’s luxury brand Lexus has become something of an icon for globakisation…had the Japanese government followed the free-trade economists back in the early 1960’s, there would have been no Lexus.