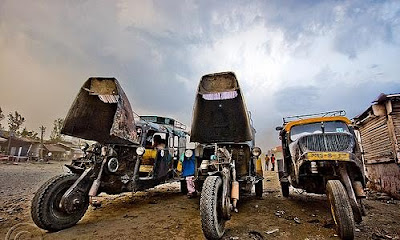 The autorickshaw turns 52 this year
The first of the autos rolled out towards the end of 1957 under the banner of the Bachchraj Trading Corporation before the company was renamed Bajaj Auto. According to corporate lore, the term ‘autorickshaw’ was coined by N K Firodia as an improvement over the manual rickshaws in many parts of the country. The government initially licensed the company to make 1000 autos a year.

The Firodias who were in partnership with the Bajajs since Independence stayed together till the early 1970s when the second generation of the two families pulled apart. While Rahul Bajaj took control of Bajaj Auto and the flagship auto business, the Firodias took control of Bajaj Tempo which manufacturers four-wheelers. Though Bajaj Tempo, now renamed Force Motors, still manufactures three-wheelers, it could never match up to a resurgent Bajaj Auto in the auto business.

With the auto’s growing popularity over the decades, its design of the vehicle has undergone a sea change. From the snout-nosed front-engined wobbler, the auto has become ergonomic with a rear engine and is efficient in fuel consumption. The newest generation of autos runs on compressed natural gas (CNG). The four-stroke engine is less polluting than its predecessor.

In the 50 years since the first auto rolled out, the number of vehicles on the road has increased manifold. Bajaj Auto alone sold 2,37,198 vehicles in the first nine months of 2006-07 as against 1,79,368 autos during the same period the year before. The company claims 78 per cent of the marketshare in the three-wheeler passenger segment. The company exported 55 per cent or 1,01,512 autos during the same period.

India-made autos are found in Guatemala, Peru, Mexico and Egypt. In Latin America, the three-wheelers are called mosca or mosquitoes for their ability to noisily weave in and out of crowded roads. Compared to Indians, people of Thailand have found more innovative uses for the auto. Of a Japanese ancestry, the Tuk-Tuk, as it is known in that country, is used as an open-air vehicle for sightseeing tourists. Resembling a golf cart, it comes with air-conditioning and televisions fitted inside. Some police departments also use modified versions as a patrol vehicle.