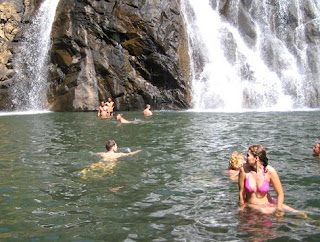 As the train passes through a thick layer of clouds amid the tall mountains of the Western Ghats, the traveller can see Dudh (milk) gushing down the mountains and forming a Sagar (Ocean) at the foothills, when the clouds disappear for a moment. This is Dudhsagar, said to be the tallest waterfalls in the country, which drops from a height of 600 metres Situated on the Karnataka-Goa border, Dudhsagar is at its best during the rainy season. Dudhsagar derives its name from the clouds of foam that form at the waterfalls. According to the legend, a powerful king who ruled the Western Ghats had his palace in the forest. The king's daughter used to bathe in the picturesque lake. She would have a jug full of sugared milk after the bath. Once while she was just having her milk after a bath, a handsome prince saw her. Embarrassed, the princess poured milk in front of her so that it could form a curtain while one of the maids rushed to get her the dress. Since then, the sugared milk (Dudh) poured by the princess is believed to be flowing in torrents as a tribute to the modesty of the princess. 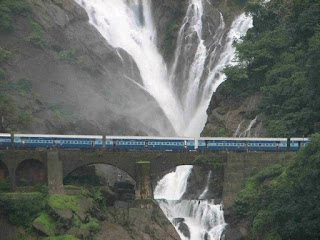