My visit to Point Calimer.. with Mr. Qureshi 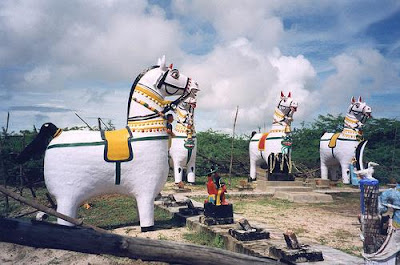 Last month I visited Trichy for some work at BHEL & Golden Rock Railway Work Shop. I stayed there for twenty days. Hotel Park Plaza is good and affordable place to stay in. During my stay in hotel I met one old man - Mr. Pinto Qureshi, approx 75 years of age, who was from Singapore and Dentist by profession. He had come there to meet his daughter who was working with local Management Institute. Every evening we both used to take dinner together and talk on all topics right from Bollywood to Osama & Obama. On Sunday morning Mr. Pinto called me on phone and said that he and his daughter are waiting at restaurant and he want to introduce me to his daughter. After half an hour I went downstairs and met them. He introduce me to his daughter, her name was Jyotsna. She was looking more like Hindu in Green Saree & Bindi on her forehead. After exchanging our greetings we started our breakfast. Mr. Qureshi asked me about my plan for the day. I said – ‘I am free’

Point Calimer is 225 km from Trichy. We hired a car from local travel agent and reach there by 15:00 Hrs. Our travel agent has booked our rooms at one of the local guest house. After taking dinner I and Mr. Qureshi went out for a walk. While walking I said to Mr. Qureshi that his daughter doesn’t look like him and she looks more like Hindu women. He said – ‘Yes! - She is not my child. It’s a long story’

We sat near terracotta horses which were made of clay and painted in bright colours, these horses are village guardians against evil spirits and were about 4 meters high. Mr. Qureshi took out his cigarette and started narrating his story…..
30 years back, in Malaysia, Mr. Qureshi was working with Red Cross Society. He was traveling along with his group of doctors around the world with a mission to bring good health for poor and needful people. Their equipments loaded on two ambulances with red crosses on them, they would go from village to village like a circus party. Tents would be pitched, their flag would be hoisted, portable iron cots joined together to create fifteen-odd beds, and a small tent used as the operation theatre. One such camp was established 30 mile away from small town of Linuco. When this group of Doctors were winding their camp to move forward they heard of devastating earthquake in Linuco. Hearing about the earthquake, Dr. Qureshi rushed to the site. Shifting through the debries, they discover the Indian baby alive, while the body of its parents lay a few feet away. Mr. Qureshi took the orphaned child back with him to Singapore and left no stone unturned to ensure that the child under his care become self sufficient as soon as she grow up. Mr. Qureshi was aware that child was Hindu and he put her name as Jyotsna. When Jyotsna was 12 years old Mr. Qureshi received a letter from government of Malaysia mentioning that they have traced the grandparents of Jyotsna and they are coming to Singapore to take the child’s custody. Than Jyotsna went to India and we remained in touch through letter and phone. After Jyotsna returned to India I visit to India once a year and spent at least one week with her. Jyotsna is now married and have two daughters.
I was shocked after listing the story…. We returned to our room and when next morning I met them, my views of looking towards them was completely changed…..There was respect and dignity…