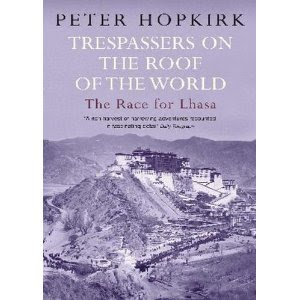 Yesterday I got one book “Trespassers on the roof of the world: the race for Lhasa by Peter Hopkirk. This is very interesting book. This book tells the stories which are bizarre, sometime tragic and frequently hair-raising. This book mentions travel experiences of different travellers who set out for Tibet from 1860 onwards.
Most interesting story is of Henery Savage Landor given in chapter 8 of this book. This colourful individual had first set his eye on Lhasa while passing through China in 1891. In his memoirs he recounts: ‘I had been told of terrible trials one had to endure to reach it. The natives of Tibet were fanatically barbarous. A white man going to that country had no chance of coming back alive. All that gave me an invincible desire to visit that strange country.’
Accompanied by 30 native carriers, he successfully crossed into Tibet on july 13, 1897, via the 18,000 feet Lumpia pass. The journey was punishing, and within five days of entering Tibet all but nine of his men had deserted him. They had to face icy torrents, Tibetan petrols and camping at extreme altitudes. This hardship, together with the fear of what would happen to them if they were caught smuggling an Englishman into the country, soon proved too much for five of his remaining man. After further three marches, two other deserted during the night, taking with them vitally needed supplies and equipment. Their departure now left Henery with only two men. One was his personal bearer, Chandan Singh and other was a coolie named Man Singh, who turned out to be suffering from leprosy.
While they were crossing one of the rivers, misfortune struck them. One of the yak carrying their remaining food, ammunition and other stores went under, spilling its load. Henery dived repeatedly into glacier-fed river in a desperate attempt to retrieve part of the load, but in vain. Stranded now without food in this sterile landscape, he decided that they would have to try to buy supplies from the first Tibetan encampment or village they came across.
Three days later, exhausted and half starving, they reached the tented hamlet of Toxem. They managed to buy from the Tibetans sufficient food to keep them going for several weeks. One evening while walking along the lake Henery was seized from behind by several persons who grabbed him by his neck, wrist and leg and threw him on his face. He fought tooth and nail to free himself from assailants, but within a second he was held by some 30 men. The struggle continued for some 20 minutes, during which Henery’s cloths were torn almost to shreds. Finally the Tibetans managed to control him by strangling him with ropes. He was dragged, suffocating, to ground, where the Tibetans kicked and trampled on him with their heavy, nailed boots, before binding his wrist, elbows, neck and ankles. After that Henery heard a whistle blown. Some 400 tibetan soldiers, who had been lying out of sight aroud the camp, sprang to their feet and surrounded the three bounded prisoners.
During night on friendly soldier came near Henery and began toloosen his bond under the pretence of tightening them. Covering the Henery with blanket, he whispered quickly; ‘Your head is to be cutt off tomorrow. Escape tonight. There are no soldiers outside.’
Complete story is interesting and marvellous… book is available at Reliance Mart in Ambiance Mall