214 Days of Gandhi in Delhi 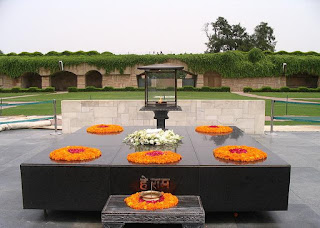 Today Mahatma Gandhi was born in Porbandar, Gujarat. You can of course go to Rajghat and visit nearby Gandhi Smiriti Museum. But one place that we always forgot is Valmiki temple at Valmiki colony near Mandir Marg. For 50 years, the residents of Valmiki Colony have kept the memories of Mahatma Gandhi, who spent some time with them, afresh. Even today, the elders will recount for you interesting anecdotes about the days Bapu spent here — from April 1, 1946 to early 1947. He purposely chose this place, so as to live along side of ‘untouchables’.
It was here that Bapu met Lord Mountbatten, the Cripps Commission, Sir Patrick Lawrence and took the freedom movement further. It was also during his stay here that Gandhi wrote a letter to Lord Irwin, which became the basis of the Gandhi-Irwin pact to be formalized later. The room at Valmiki Colony, still has pictures of Gandhi with Lord and Lady Mountabatten, Archarya Kriplani, Frontier Gandhi, C. Rajgoplachari, Sardar Patel, Maulana Azad and Pt Nehru. There is wooden desk in the centre that Gandhi used to write his letters at. A little to the right in the carpeted room is the takht or the bed that Gandhi would use.
Today, a visitor can still feel Gandhi’s presence in the room.