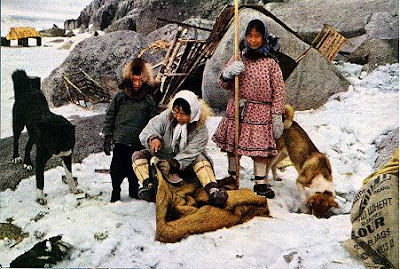 According to tradition, this is how an Eskimo hunter kills a wolf.

First, the Eskimo coats his knife blade with animal blood and allows it to freeze. He then adds layer after layer of blood until the blade is completely concealed by the frozen blood.

Next, the hunter fixes his knife in the ground with the blade up. When a wolf follows his sensitive nose to the source of the scent and discovers the bait, he licks it, tasting the fresh frozen blood. He begins to lick faster, more and more vigorously, lapping the blade until the keen edge is bare. Feverishly now, harder and harder, the wolf licks the blade in the cold Arctic night. His craving for blood becomes so great that the wolf does not notice the razor-sharp sting of the naked blade on his own tongue. Nor does he recognize the instant when his insatiable thirst is being satisfied by his own warm blood. His carnivorous appetite continues to crave more until in the morning light, the wolf is found dead on the snow!

Many begin using drugs, drinking alcohol, smoking cigarettes, or engaging in unsafe sexual behaviour for the same reasons that the wolf begins licking the knife blade. It seems safe and delicious at first, but it doesn't satisfy. More and more is desired, leading to a crisis or death.