Rare transit of Venus across sun's disc on June 6 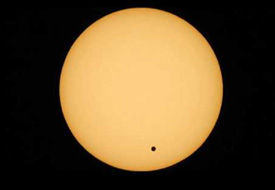 In a rare celestial phenomenon that will occur only again on 2117, planet Venus will transit the sun during early morning of June six which will be visible from almost all over the world.

The transit of Venus lasting about five hours 40 minutes could be considered a mini eclipse of the sun, since the planet instead of the moon, will be covering 1/32 of the solar disc
The greatest transit, when the black dot of Venus will be observed at the innermost point of the disc of the sun will occur at 7:02 am. The transit will end at around 10:20 am

It is advised watchers to use scientifically tested Mylar filters or Nos 14 welder's glass and not to watch the event with the naked eye. It will be not visible from , , western Africa and a portion of south eastern .