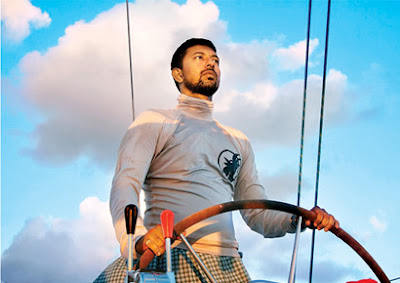 Lt. Cdr. Abhilash Tomy, 34, has became the first Indian to circumnavigate the globe non-assisted. It took Tomy 150 days of continuous sailing in INSV Mhadei to reach the milestone.

He arrived at the Gateway of India Saturday afternoon and reported completion of his voyage to President Pranab Mukherjee, the supreme commander of the armed forces, who watched from an Air Force helicopter as the sailor touched shore and later felicitated him.

"Four years of hard work and 150 days of sailing has culminated into this day. I remember each mile of my journey," Tomy said, visibly overwhelmed. "If there is one thing that the sea has taught me, it is humility. The proudest moment for me was when I hoisted the Tricolour on reaching Cape Horn."

His father, former naval officer V C Tomy, was elated. "I was not at all tense. We emailed each other twice a day. One day, however, he was late than usual and we started getting worried. After two and a half hours, he mailed us saying, 'Sorry Dad, I had fallen asleep'," he said.