My Visit to Auroville

Humanity is not the last rung of the terrestrial creation.
Evolution continues and man will be surpassed.

Auroville is a universal township in the making for a population of up to 50,000 people from around the world. The concept of Auroville - an ideal township devoted to an experiment in human unity - came as early as the 1930s. In the mid 1960s the Sri Aurobindo Society in Pondicherry proposed that such a township should be started. The concept was then put before the Govt. of India, who gave their backing and took it to the General Assembly of UNESCO. In 1966 UNESCO passed a unanimous resolution commending it as a project of importance to the future of humanity, thereby giving their full encouragement.

Why Auroville?
The purpose of Auroville is to realise human unity – in diversity. Today Auroville is recognised as the first and only internationally endorsed ongoing experiment in human unity and transformation of consciousness, also concerned with - and practically researching into - sustainable living and the future cultural, environmental, social and spiritual needs of mankind.

When did Auroville start?
On 28th February 1968 some 5,000 people assembled near the banyan tree at the centre of the future township for an inauguration ceremony attended by representatives of 124 nations, including all the States of India. The representatives brought with them some soil from their homeland, to be mixed in a white marble- clad, lotus-shaped urn, now sited at the focal point of the Amphitheatre. 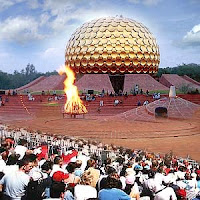 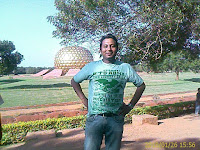 The Matrimandir (Sanskrit for Temple of The Mother) is an edifice of spiritual significance for practitioners of Integral yoga, situated at the center of Auroville initiated by The Mother of the Sri Aurobindo Ashram. It is called soul of the city and is situated in a large open space called Peace. Matrimandir, does not belong to any particular religion or sect.  The Matrimandir took 37 years to build, from the laying of the foundation stone at sunrise on 21st February 1971 - the Mother’s 93rd birthday - to completion in May 2008. It is in the form of a huge sphere surrounded by twelve pedestals. The central dome is covered by golden discs and reflects sunlight, which gives the structure its characteristic radiance. Inside this central dome is a meditation hall known as the inner chamber - this contains the largest optically-perfect glass globe in the world. The Matrimandir, and its surrounding gardens in the central Peace Area, is fully open to the public by appointment. 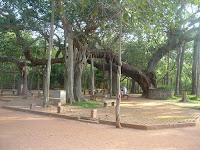 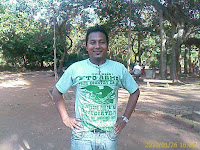